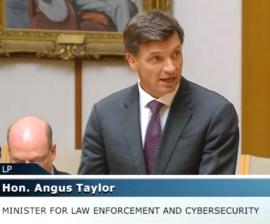 Mr TAYLOR (Hume—Minister for Law Enforcement and Cybersecurity) (16:03): It's good to see the member for Macarthur, whose electorate borders mine, here in the chamber. Whilst we won't always agree on political issues, I know that he, as a medical practitioner, knows the importance of health and safety for younger Australians. Today I want to congratulate the Australian Federal Police on the regional rollout of the ThinkUKnow cybersafety program. New sessions to train the trainers were started up in a number of regional areas in recent weeks. ThinkUKnow is a really unique partnership between industry, the Australian Federal Police and the state police. It trains volunteers to talk to schools, schoolchildren and parent groups about how young people can stay safe online.

This week, the training is happening in Rockhampton and Cairns, followed by Port Augusta, Ballarat, Kalgoorlie and Karratha in March. It's going to a wide spread of areas. In the last 12 months, ThinkUKnow has trained Commonwealth Bank volunteers in Ballarat, Alice Springs, Dubbo and Goulburn—my home town; fantastic to see them there—and it has held digital training for volunteers in Bowen, Riverton and Mildura.

We know that the internet has absolutely no geographic boundaries, so we need to reach all members of the community, especially those who might feel vulnerable because of a lack of resources. We also know that the internet has great benefits for younger Australians. It allows them to stay in touch with friends and family, feel connected and to link in to services that they need access to. But, as we know, the social media space is dynamic and it's fast moving—there are thousands of new apps released every day—and children and young people are one of the most vulnerable groups on the internet. We need to empower them to think critically, to be aware of unusual behaviour so they can make good decisions. Young people need to understand, when things go wrong online, where they can go for help and support.

The AFP has reported a large increase in referrals involving younger children. Sometimes they involve unsupervised young children playing with devices, accidentally uploading images. Other cases, unfortunately, are much more sinister and involve grooming on platforms that are popular with children. As a regional MP and as a father of three teenagers—one almost there—I know it's really important for us to get behind programs like ThinkUKnow, especially their outreach into regional and rural areas. I know the member for Hunter, who is in the chamber, will agree with that. At last count there were 750 volunteers registered in the program. I encourage school groups and any concerned parents, particularly those in regional and remote communities, to get in touch with the ThinkUKnow organisers via their website.