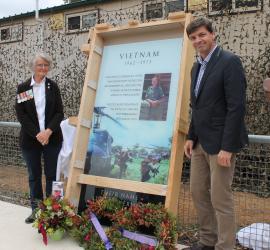 Grants of up to $10,000 are available to community groups and organisations to help conduct commemorative activities to mark the 75th anniversary of Victory in the Pacific Day.

The guidelines now allow for a diverse range of projects to be funded under the STS Commemorative Grants program, including documentaries, digital projects, and podcasts as well as community memorials and preservation of wartime memorabilia.

“It is important that future generations of Australians learn about the critical role of our service personnel and these grants will help groups in Hume to commemorate their local servicemen and women,” Mr Taylor said.

“Victory in the Pacific Day marked the end of the Second World War – a war that impacted the lives of so many Australians.

“We should never forget that nearly one million Australians served in the Second World War. Of these, more than 39,000 died and another 30,000 were taken as prisoners of war.

“I encourage groups in Hume to consider making an application for a project that commemorates our local Second World War history.”

Minister for Veteran and Defence Personnel Darren Chester said the Australian Government was committed to capturing the powerful moments of Australia’s military heritage as well as the courage and sacrifice of Australian service personnel.

“With this expanded funding, communities can hold their own commemorative service, or look at other creative ways to mark Victory in Pacific Day in their home town,” Mr Chester said.

“These projects will leave a lasting legacy in communities and educate the next generation so that the memory of Australian service men and women will live on.”

Applications for the Saluting Their Service Commemorative Grants program are now open on the Community Grants Hub (https://www.communitygrants.gov.au/) and close on Tuesday, 31 March 2020.